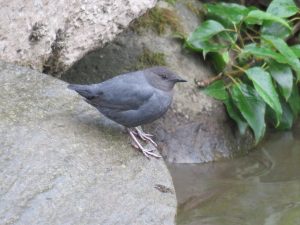 General Information:  As the name implies, the American dipper (Cinclus mexicanus), also formerly known as the “Water Ouzel”, is characterized by its dipping movements.  The American dipper is a stocky dark grey bird with a head sometimes tinged brown and distinctive white feathers on the eyelids that cause the eyes to flash white as the bird blinks.  It has long legs, and bobs its whole body up and down while perched on a rock in or near a stream.

The American Dipper’s habit of ‘dipping’ or bobbing up and down while perched on a rock or ledge is not well understood though some believe the action of dipping may help them spot prey beneath the surface of the water or help conceal their image from predators.  Dipping may also be a form of visual communication between birds in the noisy environment they favor – clear, clean, fast-moving streams.

The American dipper is of the Order, PASSERIFORMES; Family, Dipper (Cinclidae).

Range:  The American Dipper is ‘Alaska Hardy’ — a permanent resident of the Kenai Peninsula, but also able to tolerate winters even in the Brooks Range and Seward Peninsula.  Now that’s cold.

The American Dipper is North America’s only aquatic songbird, and one of five species of dipper in the world (Europe, Northern Africa, Asia, South America, and North America). 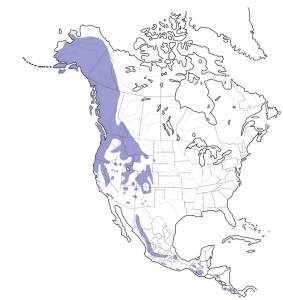 Characteristics:  It is hard to mistake the American Dipper with its dependency on streams and its iconic bobbing nature.  Look for a bird 5.5 to 7.9 in (14 to 20 cm) in length, and weighing in at 1.5 to 2.4 oz. (43 to 67 g).  Males and females look alike, although the average body mass of males is slightly greater than females.  Unlike most other songbirds, but similar to ducks, the American Dipper molts its wing and tail feathers all at once in the late summer. The bird is flightless during this time.

Find a fast-moving stream, look for a stream boulder, and the probability of seeing a dipper increase as they will spend up to 10 minutes preening (preen oil glands), creating their form of wet suit – necessary for waterproofing and insulation.

The American Dipper takes a ‘polar dip’ in the cold water with relish. It is well-adapted to its cold, underwater habitat. The American Dipper has a thick coating of down and feathers as insulation, large preen glands secreting oil to waterproof their feathers, a moveable flap over the nostrils that seals when the bird is underwater, blood cells with a large capacity for carrying oxygen, and an efficient internal system of thermoregulation.

Preferred Habitat:  American Dippers are stream-dependent, foraging in clear fast-moving streams with rocky bottoms.  They prefer unpolluted waters, and can be found in mountain, coastal, or even desert streams.

Breeding:  Dippers are fiercely territorial, vigorously defending their linear stream-dependent nesting territory from other pairs. They are mainly monogamous and in most cases return to the same nest year after year. The American Dipper breeds along swift, rocky streams, seeming to favor clear, cold water, often in narrow canyons. Seem repetitive…Guess you have the picture now about stream preference.

The courtship display may have either the male or female strutting and singing in front of the other bird, with wings drooping and bill pointed up.  The pair may then conduct a ‘flight chase’ with complex aerial maneuvers, all the while singing.  Though some pairs stay together in winter, the dipper is generally a solitary bird; after the chicks’ fledge, parents often divide their brood and their territory and part ways.

Nesting:  The nest, probably built by the female, is a volleyball-sized shell of moss, with an inner saucer of dry grass on which 4-5 white eggs are laid. In Alaska, nest building usually begins in April or May, though cold weather and high altitudes may result in delayed nesting.

Nest sites include a slight ledge on a mossy rock wall just above stream, among roots on a dirt bank, or behind a waterfall.  The nest is often placed where it remains continuously wet from flying spray.  Many dippers commonly select nest sites under bridges – an adaptable bird.  Good nest sites seem to be the main limiting factor for the presence of a population of dippers.  So if you see a bridge near a fast moving stream and you can look under the bridge, check for a dipper nest. 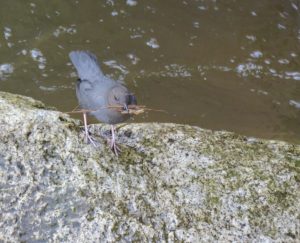 The clutch is incubated for 2 to 2.5 weeks. Females do all the incubation, but males bring food to the incubating female. The female will brood the chicks for a week or more while the chicks grow feathers to help regulate their body temperature. Both parents feed the chicks, bringing insects and small fish – feeding the hungry brood as many as 20 times an hour.  One would think the parents would be worn out after all that activity, but second broods have been recorded.

Fledging:  When born, the chicks are helpless with sparse down, but are ready to leave the nest in about 24-25 days.  The young are fed by both parents for another two weeks after fledging, as they gradually learn how to find and catch their own prey.  Chicks are able to swim and dive after fledging.

Feeding Methodology:   The American Dipper can wade, swim, and dive from either the water or the air and are capable of moving underwater rocks on the stream bed to get food. 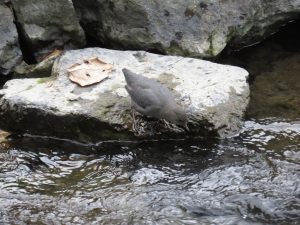 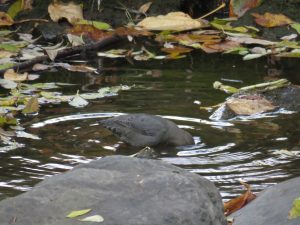 The American Dipper uses its short, stubby wings to ‘fly’ underwater with powerful strokes of their partially folded wings when chasing prey.  They can take prey from the water’s surface while swimming or from mid-air while in flight, but most food is taken underwater.

With its long legs and strong toes, the American Dipper is an underwater marvel; easily able to negotiate along the bottom of fast-moving, rocky streams in current capable of knocking over you or I.

Roosting:  A variety of sites on the ground adjacent to streams are used for nocturnal roosts.

Migration:  The American Dipper is not a long-distant migrant so it is a ‘Homer Bird’ — a  permanent resident of the Kenai Peninsula; but it may move to other locations if necessary to find food or unfrozen water.

Vocalizations:  The song consists of high whistles or trills peee peee pijur pijur repeated a few times.  The song has also been described as a loud, bubbling song.  Whatever you interpret, you will hear the dipper as the song carries over the noise of stream rapids.   Both sexes of this bird sing year round, but are often quiet after nesting.

Call:  The call is a harsh, zeet-zeet-zeet.

Conservation Status:  American Dipper presence/absence can be an indicator of stream quality, as aquatic prey becomes scarce in polluted streams.  No food, no dippers.  The dipper has vanished from some locations due to pollution or increased silt load in streams. Also, sedimentation, acidification, and toxic waste from industry of various types can cause dipper reproductive failure and abandonment of a stream.

The American Dipper’s population status is thought to be a species of ‘Least Concern’ by the International Union of Conservation of Nature and Natural Resources, with a stable population.  The American Dipper does not appear on the Alaska Audubon Watchlist (2017).

All About Birds.  Cornell Lab of Ornithology.  Downloaded on 23 November 2018 at: https://www.allaboutbirds.org/guide/American_Dipper/id