Kachemak Bay Birders (KBB) is a key supporter of the Kachemak Bay Western Hemisphere Shorebird Reserve Network (WHSRN) site. KBB has taken the lead in providing monitoring of Kachemak Bay’s spring shorebird migration, keeping the Kachemak Bay WHSRN site online information current, and recently submitted a nomination (which was approved) expanding its size to include most of the city, state, and federal intertidal and open waters in Kachemak Bay previously designated for conservation.

To qualify for a WHSRN designation, the site’s landowner(s) must agree to:

There are three categories of WHSRN Sites and one of Landscapes, according to their importance for shorebirds:

Sites/Landscapes of Hemispheric Importance:
– at least 500,000 shorebirds annually, or
– at least 30% of the biogeographic population for a species

Sites of International Importance:
– at least 100,000 shorebirds annually, or
– at least 10% of the biogeographic population for a species

Sites of Regional Importance:
– at least 20,000 shorebirds annually, or
– at least 1% of the biogeographic population for a species

Kachemak Bay is considered a site of International Importance.  Kachemak Bay was first designated a WHSRN site in 1995.  This 7,260-acre site comprised of parcels on Homer Spit (Mud Bay and Mariner Park Lagoon, owned and managed by the City of Homer) and areas at the head of the bay (Fox River Flats CHA and adjoining parts of Kachemak Bay Critical Habitat Area (CHA) – owned by the State of Alaska and managed by Alaska Department of Fish and Game).

In 2016, KBB organized a WHSRN nomination that included city, state, and federal land owners significantly expanding the Kachemak Bay site to encompass 231,000 acres. The nomination submitted by KBB included Beluga Slough near the city of Homer, the entirety of Kachemak Bay CHA, and Sixty-Foot Rock (a small island owned by USFWS and an important wintering site for Rock Sandpiper and Surfbird).  Approval of the nomination was celebrated at the 2016 Kachemak Bay Shorebird Festival with a brief ceremony, which included representatives for each land owner. 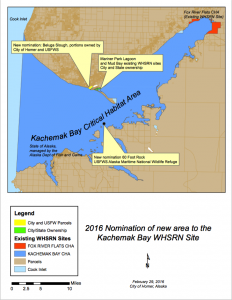 More detailed information about the Kachemak Bay WHSRN Site can be found at:  Site Profile – http://www.whsrn.org/site-profile/kachemak-bay

Shorebird Monitoring Reports can be found at: http://kachemakbaybirders.org/index.php/citizen-science