Throughout the year we will be posting actions and activities that one can undertake to learn more about the birds in and around the Homer area, as well as conservation measures to help protect these birds and their habitat.

Each month we will be highlighting a bird species that can be found in the Homer area.  While Homer is home to more than 100 different bird species, these birds are common birds seen year-round, during breeding season, or during winter months only.  Look for this information under the “Bird of the Month” menu on our home page.

Kachemak Bay Birders have voted the Semipalmated Plover as their 2018 “Bird of the Year”.  Thank you to everyone who voted.  Our new decal reflects our Bird of the Year.  Thanks to Gary Lyon for donating his valuable time and talent in creating this decal.   Donations welcome to help offset the printing costs.  Decals will be available at KBB meetings and field trips.

Kachemak Bay Birders (KBB) selected the Semipalmated Plover as the Homer ‘Bird of the Year’ as part of the national celebration of 2018 ‘The Year of the Bird’.  Check the KBB web site www.kachemakbaybirders.org for more information on our “Year of the Bird” activities in the Homer area.

During the breeding season (May to September) this species is commonly found on mud flats and beaches in and around Homer.

The Semipalmated Plover is a summer guest of Homer spending the breeding season in Alaska and northern Canada and wintering along the southern coast of the United States, and in to Central America, and in the Caribbean islands.  That is a long way to travel twice a year, although not far compared to other shorebirds like the Bar-tailed Godwit which travels to non-stop from Alaska to New Zealand each fall. 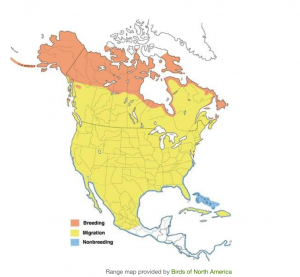 Characteristics:  The Semipalmated Plover is a small shorebird with moderately long yellowish legs.  The bird has a short neck, brown back, and white underparts except for a thick black or brown chest band.  If you see a shorebird meeting this description, except for two thick black or brown chest bands, then you are viewing a Killdeer.  This bird is also larger than the Semipalmated.

Preferred Habitat:   During the breeding season – mudflats, gravel river bars, and beaches.  On the wintering grounds and during migration – sand or gravel beaches, marshes, mud flats, or field with muddy or short vegetation.

Breeding Season:  The breeding season starts in mid May to mid June, depending on where breeding occurs.  The further north the bird nests, the later nesting occurs.

Nesting:  Semipalmated Plovers are ground nesters.  The essentially scrape the ground (be it sand, gravel, or rubble) to make a small depression, which they may line with small pieces of debris, such as pebbles, shell fragments, grass, or lichen.  Egg laying begins shortly after arrival from the wintering grounds.

Eggs and Incubation:  Generally four eggs are laid, with both parents incubating the eggs. The eggs are incubated for 23 days.  The chicks are precocial, meaning they are able to leave the nest soon after hatching to begin feeding on their own. The young however are brooded by both parents for the first 15 days after hatching, as the young are unable to maintain a proper body temperature (thermoregulate) on their own.  The female then leaves the chick raising duties to the male.

If disturbed, especially while nesting, Semipalmated Plovers will perform a broken-wing display luring the offender away from the nest or young.  The adult will emit a churtle call during this time.  This display method is also used to defend breeding and non-breeding feeding territories.

Fledging:  The young are able to fly 22-31 days after hatching and reach sexual maturity within a year.

Food Preferences:  Aquatic invertebrates, as well as flies and spiders.  They feed both day and night, which is easy to do with the northern ‘midnight sun’.

Feeding Methodology:  Semipalmated Plovers are ground forages, visually searching for food unlike other non-plover shorebirds that probe for invertebrates.  They will run several steps, stop, scan, and then peck or snatch for prey.  The birds may also use a unique method of foot-trembling, whereby they raise their foot and vibrate their toes to disturb the substrate.  This vibration causes their prey to move, making the prey more susceptible to capture.

Migration: The females will begin the long migration south before the males.  Migration typically begins in late July or early August.  Failed breeders typically head south as early as mid-June.

The birds migrate along the coasts and inland.  On its wintering grounds and during migration, it prefers sand or gravel beaches, marshes, intertidal mud flats, lakeshores, a muddy field or an area of short vegetation – as with its breeding grounds, the areas are selected for the cryptic concealment of the plover.

Threats:  Semipalmated Plover adults, chicks, and eggs are subject to predation by gulls, crows, ravens, and dogs.  Humans can also inadvertently step on plover eggs, which are well camouflaged.

During the breeding season, please be careful when walking on area beaches as Semipalmated Plovers nest on the beach.  Keep your dogs leashed.  An unleashed dog could crush eggs, kill adults and chicks, or cause disturbance resulting in nest abandonment.  Life for plovers is tough enough without having to worry about human activity as well.  If you see a small plover exhibiting the broken-wing display, go back the way you came, avoid disturbance to the bird and its nest site.

Conservation Status:  The International Union for Conservation of Nature (IUCN) have identified the Wilson’s Snipe as a species of Least Concern on their Red List of Threatened Species, with a stable population.  It was not identified as a species at risk in the The State of North America’s Birds 2016 – Species Assessment Summary and Watch List, nor is it listed on Alaska Audubon’s Watch List.

Plover Species in Alaska: In addition to the Semipalmated Plover, there are four other plover species that migrate to, and breed in, Alaska:  Black-bellied Plover, Pacific Golden Plover, American Golden Plover, and Killdeer.  The Black-bellied and Pacific Golden Plovers are common during spring migration in the Homer area.  The Killdeer is rare to Homer.  Look for Semipalmated Plover during the Kachemak Bay Shorebird Festival or during migration!  Remember, “It’s Always a Great Day to Bird.”

Cornell Lab of Ornithology.  2017.  All About Birds – Semipalmated Plover.  https://www.allaboutbirds.org/guide/Semipalmated_Plover/overview

Funding for Birds and Conservation

Want to know how the birds fared in the Omnibus Spending bill signed into law by the President?  Go to: http://www.audubon.org/news/birds-come-out-top-during-omnibus-spending-negotiations

The Homer City Council on February 12th, passed Resolution 18-015 recognizing 2018 as the Year of the Bird.  For a copy of the resolution go the City of Homer’s website at: https://www.cityofhomer-ak.gov/sites/default/files/fileattachments/ordinance/31011/reso_18-015.pdf