Welcome to “Bird of the Month”.  Each month we will be presenting a different bird species.  We hope you enjoy it.

The Downy Woodpecker (Picoides pubescens) is the smallest North American woodpecker, weighing in at around 1.0 ounce (yes, that’s right – ounce), and only 6.75 inches in length.   In comparison, the Hairy Woodpecker, which is most often confused with the Downy Woodpecker, and can also be found in the Homer Area,  weighs in at around 2.3  to 2.5 ounces,  and measures 9.25 inches in length.  The Hairy Woodpecker has a longer, sharper bill, and lacks the black spots on the white outer tail feathers that are found on the Downy. 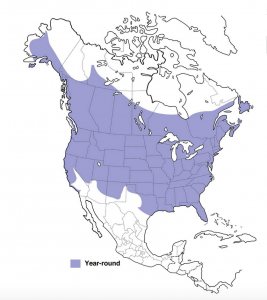 Characteristics:  Both male and female of the species are black and white, however, the male is distinguished from the female with the presence of a red patch on the back of its head.  Downy Woodpeckers pair-bond and are considered monogamous, however, during the non-breeding season, the pair may live alone.

Preferred Habitat: The habitat preferences of the Downy Woodpecker are less specialized than that of the Hairy Woodpecker.  The Downy is generally found in open woodlands (especially deciduous trees – think Aspen and Birch –  and brushy or weedy edges).  They can also be frequently found in urban areas as a popular presence at a bird feeder or within city parks, backyards, and vacant wooded lots.

If you see a small black and white woodpecker on a low bush it is a Downy Woodpecker.

Breeding Season:  The breeding season begins in early April in the southern United States and up to late May in the northern portion of its range – waiting for spring, just like us.

Nesting: Downy Woodpeckers are cavity nesters, utilizing a dead tree to excavate a cavity.  The cavity is generally 8-12 inches deep and takes the pair  13-20 days to excavate.

Eggs and Incubation: Between 3-6 eggs are laid (although normally 4-5).  Both pair will incubate the eggs, with the male assigned night duty.  Incubation lasts around 12 days.  The pair will typically fledge one brood per year.

Fledging:  Both parents feed the young, with the young fledging within 20-22 days.  Even following fledgling, the young depend upon their parents for up to three additional weeks for food.

Food Preferences:  The Downy forages for insects, larva, and seeds.  Have a Downy in your area and want a closer look, then put out a suet feeder and chances are a Downy will come to grace your feeder.

Feeding Methodology:  The Downy feeds by an acrobatic ability to cling to tree trunks and branches, utilizing its specialized feet and tail feathers.  The Downy can explore for insects along branches the size of twigs.  Remember they only weigh an ounce.

The Downy works its way up a tree trunk in a series of rapid, jerky, stop-and-go movements.  It can often be seen hanging upside down. The males tend to feed in the tops of trees on small diameter branches, while females feed midlevel or lower on large diameter branches.

Migration: Downy Woodpeckers are permanent residents meaning they do not migrate, although there may be some movement in the winter with birds at higher elevations moving to lower elevations.

Song:   Sorry, no song.  After all, Downy Woodpeckers are not Passerines, which are our songbirds.  The Downy is a drummer.

Call:  The call is a sharp “pik” sound.  The call may vary in pitch and volume.

Drumming:  While drumming is persistent, but there is a lag time of 10-15 seconds between drum sequences.

Even if the Downy doesn’t sing, who doesn’t get excited when hearing a woodpecker drumming and then anxiously looking for the source?

More Information:  For more information about the Downy Woodpecker go to All About Birds (Cornell Lab of Ornithology) at: https://www.allaboutbirds.org/guide/Downy_Woodpecker/id/

All About Birds.  2017.  Cornell Lab of Ornithology. https://www.allaboutbirds.org/guide/Downy_Woodpecker/id/