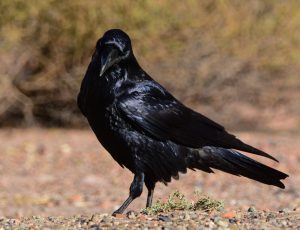 The raven is often described as the ‘Einstein of birds’—exhibiting unique problem-solving abilities and the ability to learn from observed behavior.  The brain of a Common Raven is among the largest of all birds.  And, as if the bird knows it is special and not common, the walk of a raven has been described as a swagger accentuated with a couple of hops as distinguished from the waddling crow. 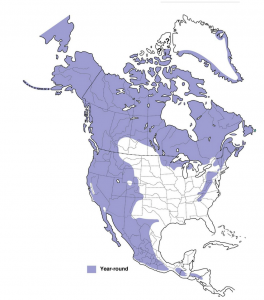 They are larger than the Northwestern Crow as demonstrated in the photo below.  A good way to distinguish a Common Raven from an American or Northwestern Crow is the by their wedge-shaped tails, best observed in flight. They are long-lived birds. 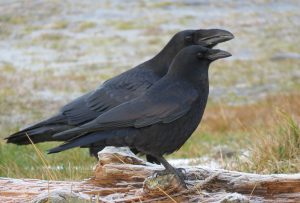 Northwestern Crow in the foreground, Common Raven in the background

Preferred Habitat: The Common Raven is often distinguished from the Northwestern Crow by habitat selection with the Raven preferring more open countryside areas near forested areas whereas the crow is more habituated to human presence.  However, being an exceptional bird, the raven provides an exception to the rule and is often found on Homer beaches with the reward of a good food supply and open space.

The Raven is adaptable to a wide variety of habitat — at home in the Alaskan Arctic, forest, grassland, and coast.  And, for you ‘snowbirds,’ the Common Raven is even found in the Southwestern, ‘lower 48’, desert.

Breeding Season:  Ravens mate for life.  In interior Alaska, mating behavior is displayed in mid-January with nesting beginning in mid-March.

Nesting:  Nests are large – essentially a pile of sticks, up to five feet in diameter and two feet in height, forming a platform of weaved sticks, and often found in the crouch of a tree or cliff overhang.  The male will salvage sticks or even break off tree limbs three-foot long to contribute to the nest.  The female is the interior designer making an inner cup 5-6 inches deep and 9-12 inches wide.   They generally pick a new nesting area each year. 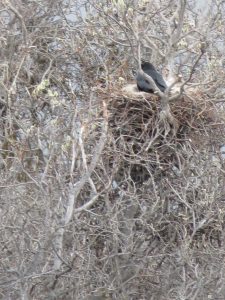 Eggs and Incubation:  The female lays 3-7 eggs with an incubation period of 20-25 days.   The female incubates while the male brings food to the female. The pair has one brood a year.

The chicks are altricial – blind and featherless, thus helpless.  They are ‘nest-bound’ and require the care and feeding by both parents.

Fledging:  The chicks leave the nest about 4 weeks after hatching.  The remain with the parents after they fledge.

Food Preferences: The Common Raven has been described as ‘feeding on practically anything’ in its Omnivore style dietary preferences. They are opportunistic feeders.

The Common Raven is often a major predator, especially taking nest eggs of seabirds.  Foraging is often facilitated by a pair of Ravens as they incorporate clever methods of finding food.

They will cache or hide their food, and raid other ravens’ caches.  They are known to regurgitate undigestable food (think pellets).  Their diet is mostly small mammals, but also berries and other fruit, grains, small invertebrates, amphibians, reptiles (outside of Alaska, of course), and birds.

They will follow a predator’s tracks to a fresh kill; and will tug on the tail feathers of a raptor (such as Bald Eagle) to distract it so it can steal a bite of food.  This activity has been observed on the beach at Anchor Point during the summer fishing season.  Check it out next time you are there.

During the non-breeding season, they may travel up to 30-40 miles from their roost site to feed.

Roosting:  In winter, Common Ravens may gather in flocks to forage during the day and to roost at night. During the rest of the year, they are often coupled, or in small groups. As many as 800 ravens have been seen in one roost near Fairbanks.  Now that is a lot of ravens.

Migration:  The Common Raven is a year-round resident of Homer – well throughout its range.  It has been the only bird present during the Christmas Bird Count in Barrow.

Vocalizations:  The Common Raven is described as a great mimic and possesses a varied repertoire of social vocalizations.  One study in Alaska showed ravens have more than 30 distinct vocalizations (including mews, whistles, even dripping water sounds).  The most common vocalization is deep guttural or croaking voice – it almost sounds like the Raven is talking to you, or voicing an opinion.  They are talented mimics.

Fun Facts (there are a lot of them for the raven):

Conservation Status:  Ravens disappeared from much of the East and Midwest before 1900. In recent decades they have been expanding their range again, especially in the northeast, spreading south into formerly occupied areas.

The International Union of Conservation of Nature lists the Common Raven as a species of Least Concern – trend increasing.  The raven does not appear on the Alaska Audubon’s Alaska Watchlist 2017.  There is an estimated 7.7 million Common Ravens.

Other Raven Species in Alaska: There are no other raven species in Alaska, but other members of the corvid family here include the Northwestern Crow, Steller’s Jay, Gray Jay, and Black-billed Magpie.

For more information:  The Common Raven has been researched extensively.  Several good books include:

The National Audubon Society has a great video on ravens singing to their mates.  Check it out at:  http://www.audubon.org/news/listen-sweet-soft-warble-common-ravens-sing-their-partners

Alaska Department of Fish and Game.  Downloaded on 11 August 2018 at http://www.adfg.alaska.gov/index.cfm?adfg=commonraven.main

Arnold B. van den Berg/Macaulay Library at the Cornell Lab

Cornell Lab of Ornithology.  All About Birds: Common Raven.  Downloaded on 16 May 2018 https://www.allaboutbirds.org/guide/Common_Raven/id

Marzluff, John M. and Tony Angell. 2005.  In the Company of Crows and Ravens. Yale University.