General Information:  Common Redpolls are common Arctic and sub-Arctic breeders.  Their numbers vary from year to year (irruptions) depending upon on the availability of seed.

Description:  These small songbirds are members of the finch family and are about 5.25 inches in length.  Females have a red or orange cap, while males have a red cap and red on the breast and sides, with distinctive black chins.  The male and female have streaking of the flanks, rump, and undertail coverts and a yellow bill. 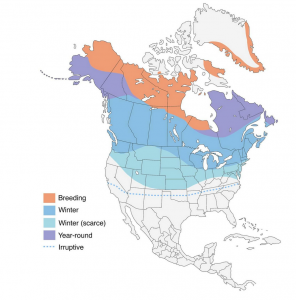 Breeding Season:  Breeding begins in late April in the western states, and June in the east.  The female searches for the nest site and builds the nest on a horizontal branch or in the crotch of a spruce, alder, or willow.  They nest low to the ground.  On the tundra the nest is placed under a rock ledge, in low ground cover, or among driftwood.

Nest: The nest is cup-shaped, consisting of fine twigs, grasses, and plant stems, and lined with down, feathers, and hair.  In the arctic, old nests may be reused, in which case the female relines the nest.  Pairs will often nest near one another in loose associations.

Eggs and Incubation: Usually 4-5 eggs.  Nestlings are altricial (young are unable to care for themselves when born).  Female incubates the eggs 10-13 days.  Young are tended by both parents. The adult pair remain together and may have from 1-3 broods in a season.  That’s a lot of young ones to take care of each year.

Food Preferences:  Common Redpolls are seed eaters, preferring a seed about the size of their bill.  Birch catkins are a preferred seed source.

Migration:   During a normal year, fall migration begins in late August and extends to early December.  Spring migration is from late February to early June.   Birds migrate during the day and in flocks.

The Common Redpoll is an irruptive migrant.  They will move south irregularly in winter following patterns in food supply.  Their winter habitat is the northern boreal forest, however every couple of years, redpolls move farther south in winter, occasionally reaching the central or southern United States. Their movements generally correspond to the availability of seeds and population response to increasing numbers.

Conservation Status:  Common Redpolls are species of least concern, but populations are declining. Their estimated global population is 160 million.

Arthur A. Allen//Macaulay Library at the Cornell Lab

Geoffrey A. Keller//Macaulay Library at the Cornell Lab