General Information:  The Rock Sandpiper is a shorebird that can be found in Cook Inlet, including on the Homer Spit during the winter.  The Rock Sandpiper has a small range – Alaska, Northern Siberia, and west coast of Canada.  This bird is a member of the Scolopacidae family and consists of four subspecies. 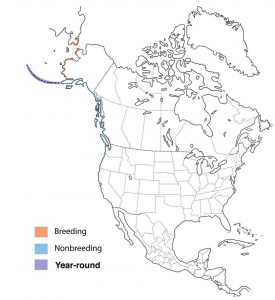 Characteristics:  During the winter, this plump, medium-size shorebird is sooty gray in color, with heavily spotted white underparts.   The summer plumage resembles the look of  a breeding Dunlin, only messier (the black on the chest is smudged, rather than the clean margins of the black found on the Dunlin breast and belly).  It has a medium-length black bill with orange at the base, and drooping slightly at the end.  The bill is shorter than a Dunlin, longer than a Surfbird.  The short legs are a greenish-yellow color, and it has a  white wing-stripe( wing bar).  Look for a dark tail in flight.

The sandpiper weighs in at 2.0-4.6 ounces, and is 7.1-9.4 inches in length.   Both sexes have the same plumage – no sexual dimorphism here.   Overall size wise – think American Robin.

Preferred Habitat:  During the breeding season, the Rock Sandpiper breeds in low-elevation tundra areas, but may also nest at higher elevations in the mountains of western Alaska.  Wintering habitat includes rocky coastlines, breakwaters, and mudflats. 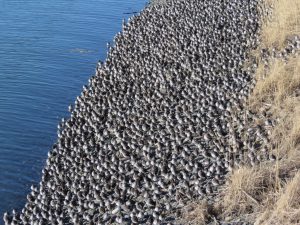 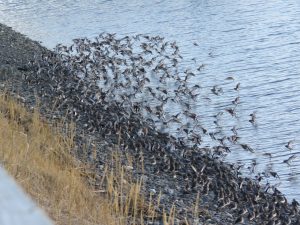 Breeding Season:  The breeding season begins in early June.  The Rock Sandpiper is a common breeder in Alaska.

Nest:  This ground nester scrapes the ground, then lines the depression with grasses, lichens, and leaves.  The male begins the scrape, with the female occasionally helping  to construct the lining.

Eggs and Incubation:   Fur eggs are usually laid at daily intervals.  Both parents incubate the eggs over approximately 20 days, with the chicks hatching at different intervals.  The chicks are born precocial (leaving the nest shortly after bird and feeding on their own).  The male tends the young until they fledge.

Food Preferences: On the breeding grounds, protein is needed and the diet consists primarily of insects, but also crustaceans, mollusks, and marine worms.  Supplements include  berries, seeds, moss, and algae.  In the winter, they utilize tidal areas and eat mostly crustaceans, insects, and small mollusks.

Feeding Methodology:  In the winter the Rock Sandpiper forages in the intertidal zone (rocky coasts, mudflats, gravel beaches, sand flats, ) where it finds its food visually.

Roosting:  This sandpiper roosts above the high tide line on piers, beaches, and rocky banks.  It can be found roosting along the inner eastern bank of the Homer Boat Harbor during high tide in the winter months.

Migration:  Spring migration is from late March to early June.  Fall migration is from late June to mid-November.  Peak fall migration occurs later than other shorebirds.  The subspecies of Rock Sandpipers nesting on the Pribilof Islands and in the Aleutians are short-distance migrants or permanent residents.  The primary Rock Sandpiper wintering in Homer is a summer resident of the Pribilofs and Aleutians.

Vocalizations:  This bird is generally silent, but listen for low whistled notes sometimes vocalized in the winter.

Threats:  Change of habitat due to climate change and exposure to predation.  Also, while the Rock Sandpiper can be enjoyed in large numbers roosting at the Homer boat harbor and feeding at the tidal flats, winter is an energy stressor so disturbance from dogs and people is a problem.

The subspecies C. ptilocnemis ptilocnemis, found in the Pribilof, St. Matthews, and Hall Islands of Alaska are listed on the Alaska Audubon Watchlist 2017 Yellow List – Vulnerable Species.  Species on this list are declining or vulnerable thereby warranting special conservation attention. The subspecies population status is estimated at around 20,000 birds.  This subspecies primarily winters in Cook Inlet.

The International Union of Concerned Scientists have listed (Red List) the Rock Sandpiper as a species of least concern, but with a declining population.

Marked Birds:  If you see or find a Rock Sandpiper with a metal band, colored plastic leg bands, and engraved colored leg flats, please report your details to:

These birds were marked at several sites in western Alaska and are part of a distribution study.

All About Birds.  2017.  Cornell Lab of Ornithology.   Downloaded on 15 August 2018 at: https://www.allaboutbirds.org/guide/Rock_Sandpiper/id