The Townsend’s Warbler is a small, colorful, black, white, and yellow songbird found in and around Homer during its breeding season.  This species is member of the wood warblers in the family Parulidae, genus Setophaga.  There are 53 species of wood warblers that occur in North America.

The Townsend’s Warbler is named for John Kirk Townsend, an American naturalist, ornithologist, and collector.  Townsend fell ill and died from the effects of powered arsenic used to prepare bird skins.  The Townsend’s Solitaire (a Thrush) is also named for him.

Range:  The Townsend’s Warbler is a west coast warbler species, breeding in Alaska, Canada, and the Pacific Northwest.  This species spends its winter along the west coast from Washington to northern Baja, southern Arizona, trans-Pecos Texas, and Central America. 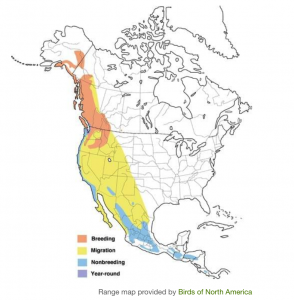 Characteristics: The Townsend’s Warbler is about 5 inches in length and weighs in at 0.31 oz (8.8 grams).  The bird has a bright yellow breast, golden olive cheeks, and gray wings.  The male has a black cap, distinct “zorro” mask, black throat, and is streaked black down its sides.

Preferred Habitat:  In the breeding season, this warbler can be found in coniferous and mixed deciduous-coniferous forests.  In its northern range, it prefers the White Spruce forest.  In the winter, these birds also can be found in oaks, madrones, laurels.

A good place to see a Townsend’s Warbler in the Homer area is along the Calvin and Coyle Trail.

Breeding Season: Breeding occurs from late May to early June.  The pair form a seasonal pair bond – so a new mate each year.  The male is very territorial while on the breeding grounds.  This warbler reaches sexual maturity at one-year of age and can begin breeding.

Nest:  The nest is a large, compact cup-shaped nest made out of bark, conifer needles, lichens, moss, slender twigs, and dried grasses. The nest is then lined with moss, hair, and fine grasses.  The well-concealed nest is built in a conifer tree well out on a horizontal branch.  Both sexes are believed to construct the nest.

Eggs and Incubation:  Three to seven eggs are laid and incubated for 12 days.  Not much is known about incubation, but it is believed that both parents incubate the eggs.

Fledging: The chicks are fed by the female, and possibly by the male.  They fledge 8-10 days following hatching.

On the wintering grounds in Mexico, the Townsend’s Warbler feasts on the sugary excretions of scale insects.  Yum!!!  It loves this food source enough to defend its territories around trees infested with these insects.

Feeding Methodology:  Townsend’s Warblers forage in the top 1/3 of a tree by gleening, hawking, and hovering to capture their prey.  In the non-breeding season, they will feed in mixed flocks. 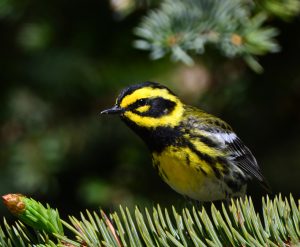 Threats:  The primary threat is loss of habitat, pesticides, and climate change. To see how climate change is predicted to affect the Townsend’s Warbler between 2000 and 2080, go the bottom of the page at: http://www.audubon.org/field-guide/bird/townsends-warbler

Conservation Status:  The global population is estimated at around 17 million.  The International Union for Conservation of Nature (IUCN) lists the species as “least concern” with a stable population. The National Audubon Society considers the Townsend’s Warbler a “climate threatened” species, although the species is still common and widespread. This species is not on the Alaska Audubon’s Alaska Watchlist.

Cornell Lab of Ornithology.  All About Birds – Townsend’s Warbler.  https://www.allaboutbirds.org/guide/Townsends_Warbler/overview  Downloaded on 13 April 2019.