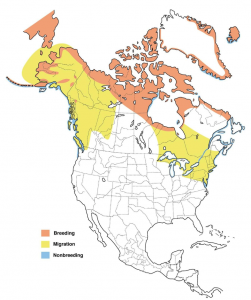 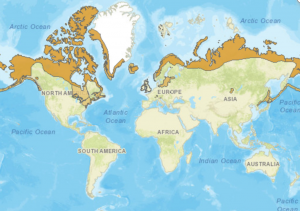 Kachemak Bay Birder, Dale Chorman talks about the more often heard, than seen bird – the Varied Thrush.  This bird’s call is unforgettable and is generally one of the first birds heard in the spring.

Have you ever seen a murmuration?  This is a coordinated flocking mechanism used by birds where all they take off at once and fly in waves through the air.  Why the birds perform this behavior is not readily known.  Is it due to avoidance of a predator, like a Merlin or Peregrine Falcon?  In early May when the shorebirds return to Homer, they perform murmurations, sometimes so often you wonder when they actually feed.

Kachemak Bay Birder George Matz, in a Point of View article for the Homer News, descsribes the hardy Rock Sandpiper that comes to Homer to spend the winter, whereas most shorebirds head further south.

For the complete article go to: https://www.homernews.com/opinion/point-of-view-rock-sandpipers-the-contrarian-shorebird/

A total of 71 bird species were observed during the 2018 Homer, Alaska CHRISTMAS BIRD COUNT.  This is a new record. Not bad for our little cosmic hamlet by-the-sea.

Check out the article in the Homer News by Michael Armstrong:  https://www.homernews.com/opinion/birders-find-a-record-71-species-for-christmas-bird-count/

Kachemak Bay Birder Carol Harding, highlights the February Bird of the Month – Rock Sandpiper.  This hardy bird winters in Homer, and can be found roosting at high tide at the Homer Small Boat Harbor.  Carol also describes two different processes found in birds:  “irruptive” and “leucistic”.  The “irruptive” process, occurs where birds, not readily seen in the Homer area during the winter, appear in great numbers, such as the increase in the number of Red Crossbills this winter and last.  A “leucistic” bird is one that has white feathers, whole or in part.  These birds are not albinos, as they lack the red eye.  Listen to Carol as she explains these fascinating aspects of bird life.

Gary Lyons introduces us to the Northern Saw-whet Owl, one of Homer’s smallest owls.  This owl is the Kachemak Bay Birder’s October Bird of the Month.

Bird Rhythms originally aired on KBBI on April 28, 2018 as part of the Kachemak Science monthly program.

The second installment of our “Meet the Corvids” was published in the Homer News on Thursday, April 14, 2018.  For a complete copy of the online version of the article go to: http://homernews.com/local-news/2018-04-12/year-bird-meet-corvids-part-ii

Starting time is based on the quarter hour before the receding tide reaches 15.0 feet, or high tide if it doesn’t reach 15.0 feet using Seldovia tide tables. The tide correction between Seldovia and Homer is only +5 minutes.

Monitoring is based on when the incoming tide is about half way between low tide and high tide. This corresponds to beginning an hour before the tide at the Kenai River.

Entrance is at +10.0 feet. Monitoring last one and a half hours.

The Christmas Bird Count is the longest-running citizen science project in our nation, and in Homer it is always held on the first Saturday in the window (Dec. 14th to Jan. 5th).

The center of the 15-mile-diameter count circle is the intersection of Kachemak Drive and the Spit Rd. The circle extends east to Fritz Creek, south past the end of the Spit, west to the mouth of Diamond Creek and to the north where there are few roads. We do not go out in boats for our count.

Participants meet at 8:30 am at IOVC for coffee/tea/breakfast foods, get assigned to teams and areas, and then go out to count all the daylight hours. At 4:30 teams return and compile results and enjoy a warm potluck supper.

A few days before the event, Dave Erikson always teaches a class on “Winter Bird Identification”. This class is valuable for new birders as well as being an excellent opportunity for more experienced birders to brush up on what birds are in Homer in the winter.

COUNT WEEK SPECIES
In addition to the bird species and numbers tabulated on the CBC day itself, additional species may be added from three days before the count day and three days after the count day; they are designated ?count week? species. This will be from Dec. 11th to the 13th and from the 15th to the 17th.
Any unusual species you see within the count circle during those days should be reported to Dave Erikson 235-3487 derikson@alaska.net or Lani Raymond 399-9477 lani67@alaska.net